Dr. Harry Yoskit, whose service as a physician spanned 63 years, including 50 years in Festus, died Tuesday in a New York City hospital at the age of 96. The funeral will be held at 1 p.m. today, Thursday, from Parkside Memorial Chapel in Forest Hills, NY, with burial in a cemetery in that area. He had been in the hospital for about a month. He had resided in Queeens, New York, since November 1979, when he retired from practice because glaucoma had caused the loss of most of his sight. Dr. Yoskit was a practicing physician in Festus from 1924 till 1979 except for about five years in the U.S. Army Medical Corps during World War II, in which he held the rank of major. He was instrumental in the formation of the Jefferson County Health Department and was on its first elected board of trustees. He served on that board for 16 years, from 1952 to 1968. He was active in the founding of Jefferson Memorial Hospital in the mid-1950's and was a member of the staff of that hospital and of Incarnate Word Hospital in St. Louis. He was especially interested in skin diseases and was known for his work in that field. Wanda Cross, who worked for Dr. Yoskit as a nurse and secretary from 1953 to 1979, remembers that "he never turned anybody down" regardless of ability to pay him and frequently helped patients financially. He is survived by two sisters, Judy Guzofsky and Marcia Spinner, both of New York City, and a niece, Rosalie Guzofszky, a university professor in Philadelphia. He never married. Yoskit, born March 20, 1889, in Lodz, Poland, came to the United States alone at the age of 15. He attended and graduated (in 1916) from the medical school of National University in St. Louis and served as an intern in St. Louis City Hospital. He served as a U.S. Army doctor during the latter part of World War I, then worked in a hospital in South Dakota until coming to Festus in 1924. His first office in Festus was downtown on Main Street, upstairs from what later was the Duncanette Restaurant. Upon his retirement, he moved to New York City to reside near his sisters.

Dr. Harry Yoskit M.D.  Born in as Hersch Joskowitz.  Naturalized 1919 in .  In 1920 he was a physician at Battle Mountain Sanitarium, He was known to be in Festus before 1925. He and his two sisters managed to get out of Lodz Poland (previously Prussia) in 1935.  He had an office at , before going into the Army in WWII. Dr. Bolgar filled in for him during that time. Upon returning he practiced from the basement office in his home on . In 1975 a pet store owner brought his ill chimpanzee named in to be treated by Dr. Yoskit. The doctor prescribed some medication and said it “was one of my strangest cases in 50 years of practicing medicine.” Dr. Yoskit developed glaucoma, became blind and his two sisters, Marcia & Judy, took him to live in where he spent his last years. He died on March 26, 1985. 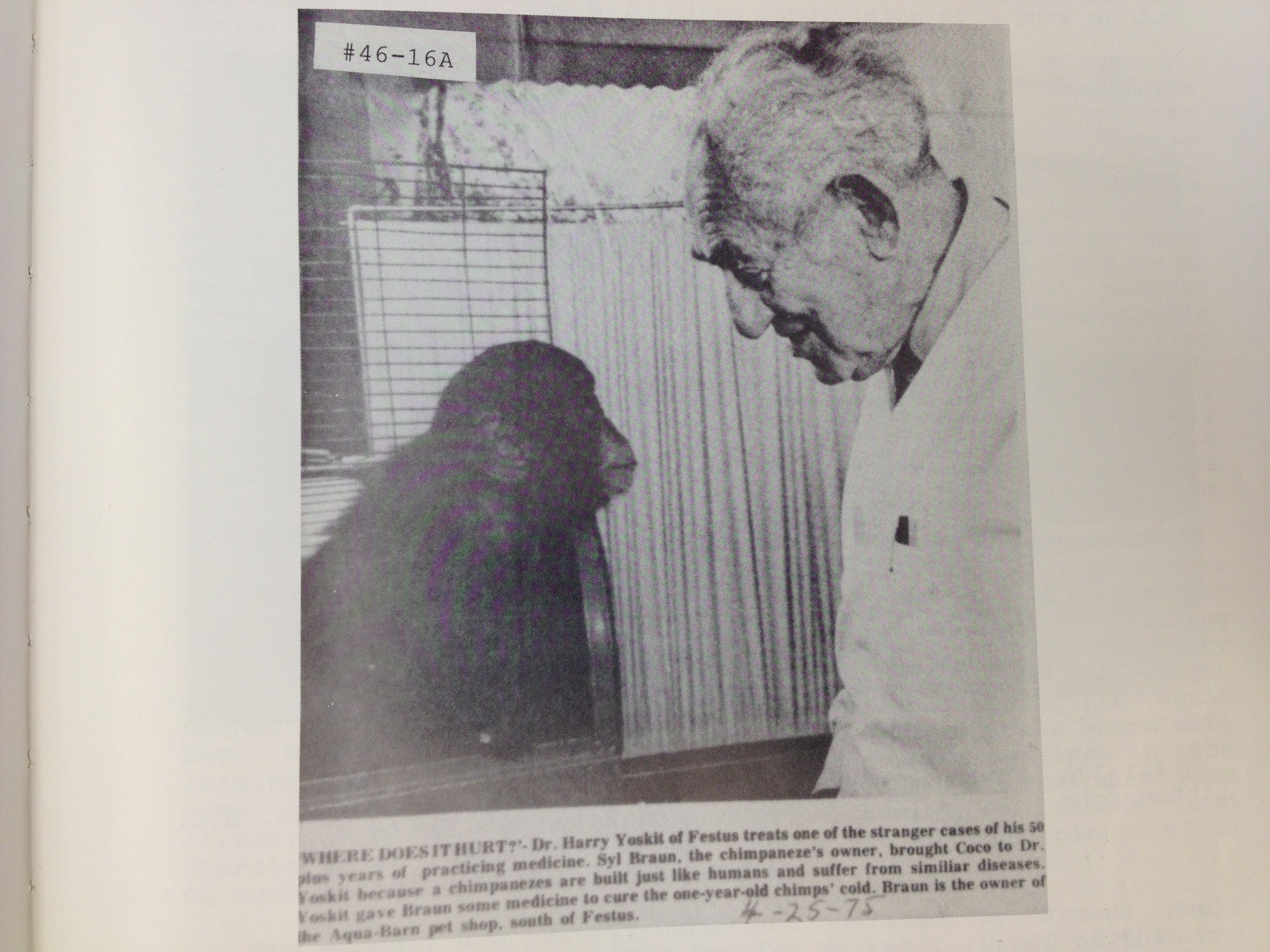